Five Tips for Scientists and Science Writers to Connect with Audiences

I was reminded of that at a recent conference for land-grant university communicators and the thought struck me because very few of the sessions actually focused on writing.

Instead, there were sessions on video and social media, web design and audience farming. The undercurrent throughout the program was that people don’t read and we have to use new ways to communicate with them.

There’s some truth in that but it’s a broad oversimplification. The fact is, people do read and a written report, story or bulletin can be the best way to communicate our information. If we’re failing to connect through those media, it’s not our audiences’ fault.

It may be our writing.

Too often, what comes out of our universities, our organizations and even our own keyboards is jargon-filled, exclusionary and inaccessible – even though we don’t mean it to be. We get busy, perhaps a little lazy, and write something like, “At the joint NIPMCC/FIPMCC meeting, the SIPMC director discussed how PMSPs could be used by EPA and OPMP, USDA NIFA, and/or by IR-4 to determine IPM-fit criteria.” 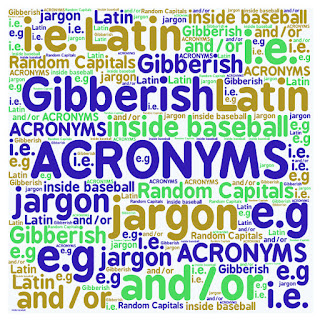 That’s an extreme (and thankfully made up) example, but it happens and it happens because there’s a percentage of people reading this who can make perfect sense of that sentence. The problem is that anyone who understands it is already in our choir, and everyone else feels we’re not talking to them.

And we want to talk to them. We want to introduce them to integrated pest management and have them join the conversation and our congregation. We want to connect, and we can. And it’s not even that hard.

Here are five simple steps every one of us can take.

1.     Lose the Acronyms
Heresy, I know! I mean, who wants to type out National Integrated Pest Management Coordinating Committee. Every. Single. Time.  But acronyms are confusing and exclusionary, they really are. Even IPM.

But everyone knows what IPM is, right? Really? Does your neighbor? Does your senator? Do they know we mean integrated pest management, or do they think we’re referring to intellectual property management, integrated process management, independence physician management or the International Partnership for Microbiocides? They all use IPM, too.

It’s the easiest thing in the world to fall into the alphabet soup of acronyms. They’re like the secret clubhouse password we knew as kids that show we’re in the group. But unfortunately, they have the exact same effect of keeping other people out. We can’t connect if we’re excluding and confusing people, even unintentionally.

So try this:
·      Instead of acronyms, use words. Use names. On second references, use shortened versions of the names. The National Integrated Pest Management Coordinating Committee is just the coordinating committee or even just the committee after the first reference.
·      If you must use an acronym, like IPM after you’ve spelled it out once, don’t use more than one per sentence.
·      Don’t create new acronyms, however well intentioned. Acronyms are like atmospheric carbon – there are enough out there already and adding more just hastens our demise.

It’s harder to write without acronyms, but readers will absolutely thank you. (Actually they won’t, but they will keeping reading your report and that’s what matters.) It’s worth the effort. Promise.

2.     Latin is Dead
I know Latin is the language of science, so if you’re writing for a peer-reviewed journal of course you’ll follow its conventions recognizing that it has a specialist audience.

But for any other publication, report or communication, at the very least ask yourself if Latin names are really necessary for your intended audience or if common names will do. If it’s important to include a Latin species name for accuracy or clarity or educational purposes, then absolutely use it. But if it’s not, leave it out. Generally, the public has less need of Latin than folks at universities believe.

One thing that’s never necessary? Latin abbreviations, e.g. e.g. (Sorry, couldn’t resist.) The Latin abbreviation e.g. stands for exempli gratia and means “for example.” But most people don’t know that, so a better way to say for example are the actual English words “for example.” Or “such as.” And instead of i.e., which stands for id est and means “in other words,” simply use “in other words” or just a comma and the definition you want to include.

3.     Sentences Aren’t Tables
In tabular data, use as many abbreviations and slashes and notations as you need, but in sentences use words. Pounds per square acre, not lb/ac2.

4.     Punctuate Simply, Capitalize Rarely
We write to help readers, and punctuation is designed to help readers, so let it work for you. And simple works. Commas and periods cover most situations. I write a lot and use a semicolon about once every six months. Other bits of punctuation that are handy are the en dash – a great way to set off a simple explanation – and the occasional parenthesis (which is similar but diminishes what’s inside it.)

Beyond that, punctuation gets in your way. Slashes should only be in web addresses and it’s never necessary to write and/or any other this/that construction.

As far as capital letters, only use them for the names of people and the official names of official things. Concepts don’t get capitalized.

5.     Write Like You Speak
Why do people like videos? Because in video, we use spoken language and it’s easier to understand.

So write like that. If a project report asks for a non-technical summary, describe your project on paper the exact same way you’d describe it to a neighbor. Write it like you’d say it if someone was making a video about your research. Write a pest bulletin the way you’d explain it to a grower in person.

All these tips are just specific ways to make our writing more conversational and accessible, and accessible is everything. We work hard to promote integrated pest management. We want people to engage with our programs. We want growers and pest managers to use our bulletins. We want regulators to understand our issues, and legislators to value our contributions. And we get there if we’re communicating clearly.

So use your words. Words are good. 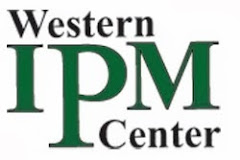